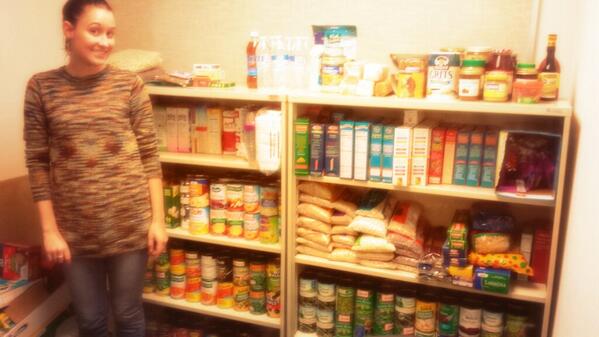 Check out this awesome video showing all the great work being done by universities just like Governors State across the Chicagoland area.

Martin Luther King Jr Day, Monday January 20th, is the biggest service day of the year. It is the singular national holiday that is treated as a day on… not a day off. In 1994 federal legislation was passed urging all Americans to consider MLK Jr. Day a national service holiday. Governors State University was more than willing to pick up this call. In the months before January 20th GSU applied for a Campus Compact grant and was awarded $500 to assist in the construction of a very ambitious pilot program we called GSU’s Martin Luther King Jr. Service Day (it was not the most inspired of titles). Governors State then connected with National Louis University, Columbia College, The Chicago School of Professional Psychology, Lewis University, the Veterans Housing and Employment Assistance, and Illinois chapters of the Student Veterans Associate. A task force was created between these institutions to pool resources in creating a large MLK Day of Service that would span the entire Chicagoland area. The event was set up such that there were three main assembly points students could travel to: Downtown Chicago hosted by Safe Haven and coordinated through National Louis University, the West Side of Chicago hosted and coordinated through Louis University, and the South Side and South Suburbs hosted by VFW Post 311 and coordinated through Governors State University. Between the different organizations in the task force over 15 events were hosted, and 137 students participated.

Governors State held its assembly at 9 AM at the VFW Post 311, which would also function as a service site over the course of the day. Coffee, doughnuts, and lunches were given to the volunteers present, and they were assigned (or assigned themselves) to one of four different service locations. There was the YWCA in Chicago Heights where volunteers would create a play room out of what had previously been storage space; there was Riegel Farm in University Park where volunteers would help perform the daily farm chores as well as repair any damage done to the infrastructure of the barn during the polar vortex that had occurred the previous week; there was the Benton House on the South Side of Chicago where volunteers would assist the 100+ year old community resource center with archiving work and setting up a free library for the community; and there was the VFW a veteran focused event where volunteers worked to repaint their great hall. Charter buses were provided to transport volunteers between their service sites and the assembly point. Students were also encouraged during the down time in between events to decorate birthday and Easter bags for the elderly as a project sponsored by Little Brothers Friends of the Elderly, an international organization dedicated to the selfless care of our seniors. Students spent the day, between 9 AM and 4PM working on their service projects and then from 4PM to about 5PM they all gathered at the assembly point again to have pizza and engage in civic reflection. Overall this event attracted over 50 volunteers from the GSU community.

One volunteer had this to say about the service day: “For the 2014 MLK Day of Service, I served at the YWCA of Chicago Heights with a group of fellow Dual Degree Program students and a few other GSU students. The site contact was an alumnus of GSU, so she automatically made us feel at home! The YWCA is a sexual assault center and our task for the day was fixing up the children’s playroom. The YWCA had received some toy and furniture donations, but no one had put them together or made them use-able for the kids. Some of our group focused on building the donated items while the rest of us spent our time cleaning and reorganizing the playroom. When we were finished, it looked like a totally different room! The best part of the day was seeing the way the room looked when it was done. It was fulfilling to know that we had all really made a difference. After we put the playroom together, the whole group sat down and made a mural to hang on the wall. Hopefully every time the children look at it, it will inspire them to make a difference, too!” 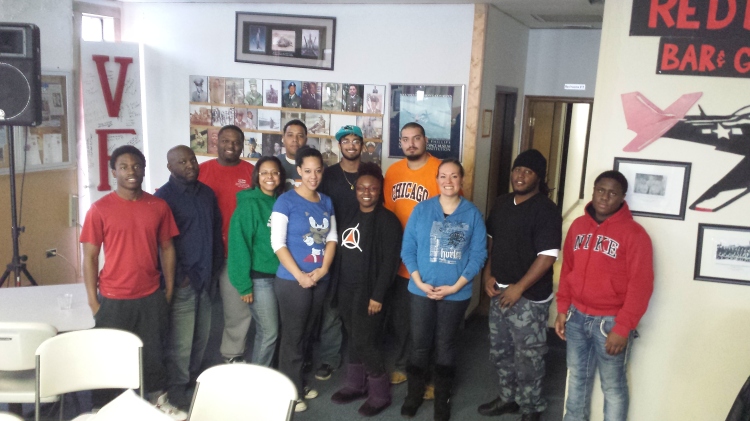 In this premier episode of the Food Pantry Webshow, dedicated to promoting ways to eat healthy and wholesome meals on a budget, host Shaniqua Jones teaches us how to make a delicious Waldorf Spicy Chicken Wrap. Shaniqua only uses ingredients that can be found at our GSU food pantry, or donated by the GSU sustainable garden.

Scheduled service days at Governors State are relatively new. We work with different organizations on different themes depending on the time of year we are having the service day. Each one is a brand new adventure for the participants, and you never really know what to expect. This was definitely true for our service day at Riegel Farm this past November.

When I took the train that morning to the farm I only had a vague notion of the service we would be doing. I must admit I was a bit nervous. I hadn’t even been on a farm since I was a kid, and I really had no experience working on farms or with farm animals. But, like the rest of the volunteers I showed up that morning in bright-eyed anticipation of whatever the day might hold. As we waited for Rob, the farm manager, to open up the barn the volunteers quickly chattered at each other at perhaps an octave too high for the occasion, I could tell I wasn’t the only one who was nervous.

My first step into the barn was a bit of a shock. The smell was worse than I could have imagined or prepared for. As I scanned my new surroundings I saw not only the usual assortment of farm animals, chickens, horses, rabbits and goats, but a bevy of more exotic creatures: llamas, ponies, miniature horses (which, as Rob took the time to explain to us, are very different from ponies) and even an alligator!

Our work for the day consisted of cleaning out the chicken coops, the stables for all the animals, cutting and resizing mats for the horses, providing feed for the animals, and sweeping out the barn. The work was, as we expected, difficult physical labor however, over the course of the day I think we all realized it was something else too; It was a lot of fun!

Over the course of the day the spirit of the farm started to surround us. There was an eight year old boy who volunteered his weekends at the farm who told us which goats were nice and which were more ornery and likely to bite you, which chickens were his favorite, and what different phrases the parrot knew and you could get him to say them. During our break, Rob told us the story of a pig he had rescued as she fell off a truck on the way to the slaughterhouse. How for the first few months he had raised her at his home (a circumstance his dogs did not initially take too kindly to) and then when it was big enough took her to the farm. And, how over the years she had grown too large and strong for its stable and had a habit of trying to break the door, until she succeeded in her efforts and Rob was forced to send her away. Finally, there was a man who worked construction now, but had volunteered at the farm since he was a kid. He told us how he would rescue horses from farms or race tracks that did not want them anymore and bring them to Riegel Farm.

When our day ended, I think we all left far happier, and far more exhausted, than when we had entered. I drew satisfaction, not just from the pleasure of having done a hard day’s work, but also from the knowledge that I had been allowed to participate in something greater than myself. I had gained knowledge of a place that has affected so many lives over the years, and now I got to be one of those happily affected. When I sat down on the train as it took me back to Chicago I noticed the stares and wrinkled noses from people around me, I looked down and realized for the first time in hours, I reeked! Instead being embarrassed though, I found myself smiling, because I knew something the people around me didn’t, I knew the magic of Riegel Farm.